Roman Zuzuk’s work is inspired by childhood memories of the small Ukranian village in which he was raised.

Other Work by Roman Zuzuk 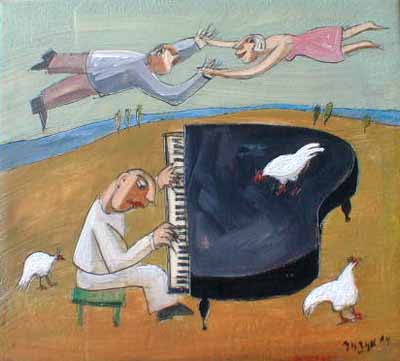 Roman Zuzuk was born in 1961 in Selec, Ukraine. From 1980 – 1984 he studied at Simferpol Art School in the Crimea and later attended Kiev Academy of Fine Arts. Zuzuk’s work is inspired by childhood memories of the small Ukranian village in which he was raised. His bold use of color, wild patterns, and lyrical compositions reflect the child in all of us. Surprisingly, Zuzuk often raises important social and political issues in his artwork, but his message is generalized as common wisdom. Furthermore, he tends to create modern fables that are not didactic, but rather open to individual interpretation. Simply stated, Zuzuk portrays our paradoxical world with grace and humor. Other artists you may like: James Rizzi

Please notify me of new work by Roman Zuzuk.