James Rizzi was an American artist known for being one of the pioneers of 3-D construction art. His limited edition silkscreen prints are teeming with life and vibrant color; the way he saw the streets of New York.

Other Work by James Rizzi 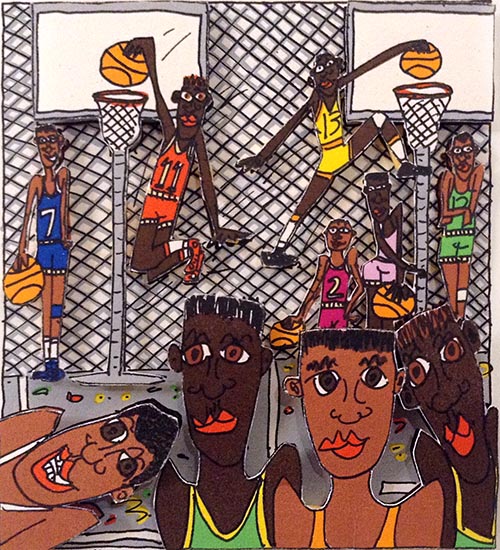 The 3 dimensional artwork of James Rizzi is both whimsical and thought provoking. The artist’s love for the city and anthropological interest in the people who reside there, is evident in his detailed composition that are teeming with life.  Rizzi’s elaborate, detailed silkscreen prints are created by using duplicate cut-outs that are adhered to the underlying serigraph with a lift that gives it the 3-dimensional property.

Born in Brooklyn, American pop artist James Rizzi was one of the first artists to bring 3-d construction art to the mainstream. In college at the University of Florida, he developed what would become his trademark technique of hand coloring a silkscreen print and then taking cut outs from a second print and attaching them over the the corresponding images in the first print using wire. Later he began using an adhesive foam. The result was what he called 3-d serigraph construction art. In the 1970’s Rizzi moved to New York, where he made a living as a street artist, selling his whimsical pop-art constructions to tourists outside museums. His work was teeming with life and vibrant color; the way he saw the streets of New York. As he became more recognized, he participated in shows and signed with a publisher who began to market his work internationally, creating hand-signed and numbered limited edition serigraph prints that were sold worldwide. By the time of his death in 2011, Rizzi’s accomplishments were many, including being the official artist at the Atlanta Olympics as well as being commissioned to paint a Lufthansa Boeing 757 in Germany. See the list of all our James Rizzi artwork for sale below:

Please notify me of new work by James Rizzi.